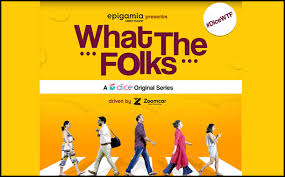 ‘What The Folks’ encapsulates the familial struggles of Nikhil, a young man who is forced to live alone with his in-laws for a few weeks. Nikhil’s bittersweet interactions with his wife’s family provide for humorous situations that will be highly relatable to today’s youth. WTF! is a journey of how modern families are breaking stereotypes, overcoming generation gaps, and growing to love one another, in spite of often having starkly different worldviews.

‘What The Folks’ is a slice-of-life dramedy that every young person and their family will relate to. The show captures the various moments of love, laughter, joy, and occasional dysfunction that we all face on daily basis. While it breaks several stereotypes, the characters and situations are familiar and relatable to viewers across age groups with fans of the show watching it from across the globe, young millennials to the older generation alike.

They say there are umpteen number of shows about the stereotypical daughter-in-law, but ‘What The Folks’ changes up that setting and puts a twist on that equation to understand the experience of today’s modern Indian son-in-law.

The web series was a smash hit: it became one of the best performing shows of 2017 with over 23 million views across Facebook & YouTube and a high engagement rate. It’s success have resulted in the show being renewed for a Season 2 on popular demand. The series has already won Silver at Talentrack awards and has been nominated at the Rome Web Awards.

To view the campaign video:  https://www.youtube.com/watch?v=ZFV-sju3UEk&list=PL4x7Of-X4Xhi_vC16hqka27e4M1zS_I3M