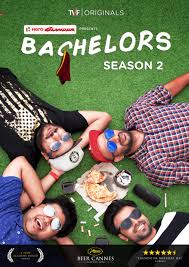 TVF brought back the second series of the most wanted web-series Bachelors. The cast of Shivankit Parihar, Badri Chavan, and Jasmeet Singh repeated while internet favourite, Jeetu, joined the cast for season two. In the story of second season, the Bachelors try to get a job, cook a meal, and battle the month end among other adventures in 5 uproarious, side-splitting episodes. The series was a huge hit and was also commended for keeping Bollywood spoof alive on the web each scene of Bachelors investigates silly circumstances in their lives that farces the amusingness and show of masala Bollywood films.

a. The term Bachelors finds its expression in youth who are used to staying away from family and living a life of convenience of with limited adherence to societal norms. We tapped into this basic insight where Bachelors wanted to celebrate their Bachelorhood.

b. The content for social media was derived from the tropes of bachelorhood like staying away from parents, bachelor food, binge watching habits, tensions with house owner, jobs and subsequent insufficient salaries during bachelorhood.

c. For the shoulder content when the web series was live, we also cut impactful content bits and pushed them on social media to drive people to watch the episode.

Bachelors Surprise Test: Post the humongous success on conclusion of the web series, they did a QUIZ for their fans. The questions were based on intricate details from the show. Bachelors Glamour Pose: A week past the closure, they did a Bachelors Glamour Pose contest where their fans were to go to a Hero dealership and pose with the Hero Glamour bike. This was an ultimate test for the fan to make that effort, fans did, and their and partner derived great value from it.

Campaign Timeline: The campaign began with a teaser launch on 16 Nov 2017 the first episode of Bachelors Season 2 was launched on 23rd Nov 2017. Final episode released on 5th Jan 2018.

They brought back the second season of their wildly popular web series Bachelors. The first season created an impact by utilizing the often-ignored comic genre of movie parodies to highlight everyday problems faced by bachelors.

Season two, was wilder, grander and technically superior with TVFs biggest star, Jeetu, steering the show as the protagonist. The movies parodied were blockbusters like Chak De! India, Dangal, Bahubali tackling with joblessness, inability to cook with hilarious consequences. Every episode of this web series was a runaway hit with the first and the last episode trending at No.1 on YouTube. The Hero MotoCorp integrations came shining through every episode seamlessly. The thematic fit, along with the bike’s role as a saviour in the story impacted the awareness and knowledge metrics of the brand. The web series was accompanied by an exciting marketing campaign called bachelor’s Day (with Hero MotoCorp) that celebrated the spirit of bachelorhood. The campaign trended on Twitter with #BachelorsDay two out of three days.

To view the campaign video: https://www.youtube.com/watch