Is OTT the New Normal for Television? 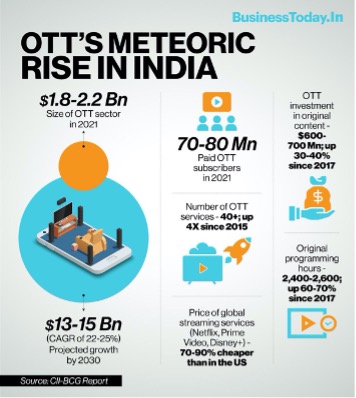 Is OTT the New Normal for Television?

According to a CII-BCG report, “The OTT market in India in minutes of consumption has climbed from 181 billion to 204 billion minutes in 2021.”

The Growth of OTT

The pandemic has influenced every aspect of our lifestyle and has brought about tremendous change in them, with films being one of them. Streaming sites such as Netflix, Disney+ Hotstar, Voot, Amazon Prime Video, and SonyLIV have grown in popularity, and in the last five years, our viewing habits have shifted dramatically. Due to the dearth of cinemas during the epidemic, moviegoers have turned to stream sites for their daily fix. Because of the lockout and the resulting ennui, many people have subscribed to these services. Living rooms evolved into new cinema halls for a year, and film viewing grew increasingly individualized.

As a result, viewership of these services increased significantly, and they now have a large audience base.

Digital content consumption is rapidly increasing, owing to the simple internet access offered by inexpensive mobile data. The consumption of entertainment content by Indians has undoubtedly altered after the move from Doordarshan to Direct-to-Home.

The shift in content-consuming behavior will inevitably upset existing content distribution systems, compelling them to innovate or become extinct. Ramayana was a smashing success in 1987, but compare it to Squid Game in 2021, and you will see a difference in terms of consumer behavior and, of course, the sensation of control, quality, and range. The audience immediately acquired a taste for such content, and popcorn flicks no longer had a monopoly on mass entertainment. Filmmakers who had previously been forced to adjust the tone of their films to suit conventional ideals were now free to create content that expressed the real spirit of the place, people, and culture discussed.

We absorb the lines, come to believe in the protagonist’s manner of life, and worry more about our favorite character than we ever did about our dark circles caused by binge viewing, which now has simply evolved into a way of life. The streaming war will empower content consumers and revolutionize how they consume information in the long term.

Apart from this, OTT also proved to be the most fantastic choice for novices to establish themselves. It has offered numerous artists not simply a venue to display themselves but also full recognition! The lately trending “Doobey” by Ahmedabad producer Kabeer Kathpalia (OAFF) is one such example of independent musicians breaking through via OTT changes through the film Gehraiyaan.

OTT has paved the way for woman-centric content way more than television ever has, in a fresh perspective that asides away from the identical residues of saas-bahu and naagin series. The next decade will most likely go not just to those with the most exemplary original program or films but also to those with cutting-edge technology, analytics, and user-friendly capabilities.

Therefore, the Popularity, Affordability, and Convenience of joining hands with Technologywill eventually lead the OTT platforms to take the spotlight before a modern, engaging audience looking forward to watching content at leisure.